‘Himachal Aaye, or Siddu Nhi Khaye?’ Most of the people who travel to Himachal might have heard this many times. And yes that is indeed true. Coming to Himachal is not fulfilled until you have tasted the famous local dishes of Himachal Pradesh including Siddu.

Though it is famous as a Himachali dish, it is mainly cooked in the upper areas of Shimla, Kullu, Manali, and Mandi. But since Himachal Pradesh is a tourist place people can find this tasty dish anywhere in Himachal.

Siddus are the look-alike of Momos, but of bigger size and of course made with different ingredients. Siddu is a doughy dish which is steamed and served with ghee, chutney, as well as sauce. The dough is filled with some specific sort of stuffing and is put to cook using steam for about half an hour. But it is not as simple to cook Siddu as it appears. It takes a lot of time and patience, and the result is always tasty.

The dough: If you have visited Himachal and have heard of ‘Bhaturu’, then you can easily relate to the recipe. Though Siddus are cooked like the momos, the dough for Siddu takes a different kind of preparation.

To make the perfect dough for Siddu, you need to knead wheat flour in water mixing with one to two tablespoon of ghee and one tablespoon of yeast. You can also add a pinch of salt to the mixture. Instead of using yeast, you can also use self-rising flour if available, otherwise mixing yeast is enough. As soon you have kneaded the dough you need to cover it up with a clean cloth and leave it for fermentation for about three to four hours.

The Stuffing: Stuffing of Siddus can vary home to home and places to places. Mainly the stuffing includes the month lentils or Udad Dal or dry fruits like walnuts, almonds, and apricot seeds.

Soak the Udad Dal into the water overnight. When the Dal has soaked the water properly, grind it mixing all the spices into it. The result will be a paste-like mixture. The spices and the dal are mixed properly and the stuffing is ready.

Cooking the Siddu: Have a look at the dough after three hours, you will find that it has risen a bit and is ready for cooking.

Preparation: In old times, people used to take a big open utensil (a big patila), and on its base put a utensil stand or make a mesh using some wooden sticks to keep the water (for steaming) and the Siddu separate. Also if you have seen patal (leaves used to eat in Himachal), people used to wrap the Siddu in those patal leaves to make sure that Siddu doesn’t stick with each other. But today most of the people are using the momo steamer, which is quite easy.

Take the momo steamer and fill the lowest container with water and keep it on the full flame on the gas stove. Now grease another compartment with saturated oil and place it on the first compartment, so that you can directly keep the Siddu on it.

Now take a small part of the dough (a bit bigger than the one you take to make a simple roti), roll it with your hands, and press between your palms like you would do for a parantha and take a small part of the stuffing you have prepared. Put the stuffing in between the pressed dough, and try to fit it in. Make the dough round again and put the dough ball inside the greased compartment. Follow the step until the dough is finished. Keep the Siddu separated as they will rise more when steamed.

Use another compartment if the first one is full. Cover the last one with the lid of the momo steamer and keep the Siddu on low to medium flame for about 25 minutes. Keep checking them and the water in the first compartment. You need to fill more water if the water is evaporated completely.

After 25 minutes you need to take a knife and insert it in one of the Siddu. If the knife comes out to be clean the Siddus are ready. If not you will need to wait for a few more minutes.

So finally the Siddus are ready. Siddu taste best when served hot, so don’t let them get cold and start eating them as soon they are ready. For better taste I mix a pinch of salt to Ghee, you can also try it. So this was the recipe. Though the read is longer, it isn’t that tough to give a try. 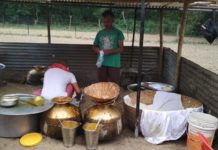 Sepu Badi : One of the Best Dishes from Himachali Dham 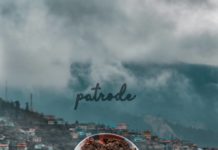