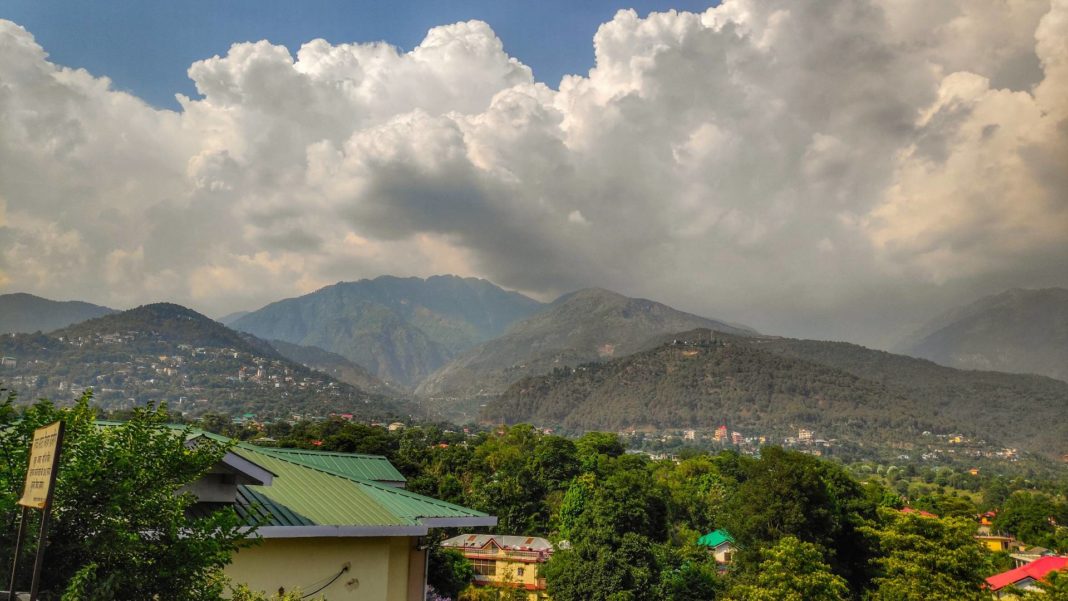 Dharamshala is a beautiful hill station immersed in the glory of Mother Nature and Buddhist culture. Dharamshala means ‘a spiritual dwelling’, which refers to a shelter or rest house for pilgrims and travellers. This calm and serene hill station is home to the 14th and current Tibetan Spiritual leader Dalai Lama (Tenzin Gyatso) who, came to India after the Chinese conquest of Tibet and was offered as a refuge in Mcleodganj (upper Dharamshala), in 1959. It is also the Head office of the Tibetan government-in-exile. The main attraction of the city is the Losar Festival that the Tibetan people celebrate every year to mark the start of the Tibetan New Year.

Location: Dharamshala is located in the scenic valley of Kangra and is about 18 km from the city Kangra. The city is located at an altitude of about 1,475 meters above sea level and is surrounded by deodar cedar trees, Dhauladhar Mountain Range, exotic culture and monasteries. The city can be accessed by road, train or by flight. One can take overnight Volvo bus or can hire a cab to reach Dharamshala from Delhi, Chandigarh or Pathankot. The distance from Delhi to Dharamshala is about 500 Km. and from Chandigarh to Dharamshala is about 243 Km. The distance from Pathankot to Dharamshala is about 88 Km. The nearest narrow gauge railway station is Kangra. Similarly, the nearest airport is Gaggal airport. One can take the HRTC bus from Kangra to reach Dharamshala.
Climate: The climate of the place is warm and temperate. In summers, the temperature ranges from 16ºC to 31ºC, whereas in winters, it varies from 6ºC-25ºC. The various pleasing surroundings of Dharamshala and the presence of Buddhist culture makes the hill station one of the most popular tourist destinations in India, where people can enjoy the scenic beauty of nature and can have the best holiday experience ever.

Popular Places to Visit in Dharamshala

HPCA cricket stadium is an internationally acclaimed stadium and is considered to be the world’s highest stadium situated at an altitude of about 1457 meters above sea level. The cricket stadium is the most attractive in the world, as the mesmerizing snow-clad Dhauladhar Mountain Range surrounds the stadium. The stadium hosts some domestic matches like Ranji Trophy matches. Other than that some IPL matches and One Day International matches have also been played here. Because of the beautiful scenic view, the very stadium is a must-visit place while in Dharamshala.

War Memorial (also known as Shaheed Smarak) is built at the very entrance of Dharamshala town. The memorial is built in the honour of the Himachali Martyrs, who lost their lives while defending our motherland in the Indo-China war, Indo-Pak and the UN peace operations. The memorial is made of three huge panels of black marble with the names of the soldiers engraved on them. The panels are curved, which signifies the continuity of life and, also the fact these great soldiers will always be immortal. The memorial is surrounded by thick pine trees and garden, which make the place even more beautiful.

Mcleodgunj is named after English lieutenant governor of Punjab, Lord David Mcleod, during 1848 and is about 10 km from Dharamshala. The place is also known as ‘Little Lhasa’ or ‘Dhasa’, which resembles the Tibetan Capital Lahasa. Mcleodgunj is a suburb of Dharamshala in Kangra district of Himachal Pradesh and is situated in the lap of Dhauladhar Range. The culture here is a fusion of Tibet with some influence of the British.

4. St. John in the Wilderness Church

The church of the St. John in the wilderness is one of the oldest Anglican Church in Dharamshala, built on the way to Mcleodgunj. The church was built in 1852, in order to provide a place to worship for British soldiers who were posted here. The church is dedicated to Lord Elgin who was the Viceroy of India from 1862-1863. The site also has an old graveyard and, is a memorial place of Lord Elgin. The church is also known for its two magnificent Belgian stain-glass windows donated by Lady Elgin (wife of Lord Elgin) and, a bell which is brought from England cast by Mears and Stainbank in 1915. The church is surrounded by mighty Deodar trees and is a very famous tourist destination.

The Lake is a simple, freshwater lake situated at an altitude of about 2934 m above sea level and, is 9 km northwest of Dharamshala town. The water in the lake comes from melted snow from the Dhauladhar Range, and the water is so crystal clear that one can see the lake bed. The place is best known as the trekking destination in the Dhauladhars.

It is situated about 15km from Mcleodgunj and one can take a cab or local bus to get there. The institute is named after ‘Norbulingka’, which is the summer house of Dalai Lama in Lhasa, Tibet. It is built in order to restore and teach Tibetan arts, craft and culture to Tibetans as well as to other people from different religions and descent. Norbulingka Art Museum, which is located within the institute, must be in your visit list.

Naddi is a village located about 3 km from Mcleodgunj in the shadow of Dhauladhar Range. It is a starting point of many treks.

Dal Lake is a small mid-altitude lake, which is 3 km from Mcleodgunj and has greenish water. The environment there is quite, calm and serene and is surrounded by a forest of deodar trees. A small Shiva Temple is built on its bank. Every year in  September, the Gaddi Tribe organise a fair here to mark the presence of Lord Shiva.

Dharamkot is a small hill station which is about 3 km above Mcleodgunj. It has a beautiful view of Dhauladhar Range and tall pine trees and rhododendron forest. A meditation centre is also situated at this place, known as Tushita Retreat Centre, which has meditation courses. From Dharamkot, at a trek of about 11 km resides a beautiful place called Triund. The trek is about 11 km (3-4 hours) and starts from Gallu Devi Temple. It is called Triund because the person can see three stunning snow-covered mountains from that point (Tri = three and Und = mountains).

This monastery is the personal monastery of the 14th Dalai Lama and, also known as ‘Dalai Lama Temple’. The establishment of this monastery was led down in the 16th century by the 2nd Dalai Lama. This is the largest Tibetan Temple which is outside Tibet and, contains a huge statue of Buddha. This is the place where the monks enchant prayers, do mediation, build an intricate sand mandala and debate Buddhist philosophy. The temple is about a small walking distance from the main town of Mcleodgunj.

Travelling with Cousins is Never a Bad Idea; A Trip to Shikari Mata Temple